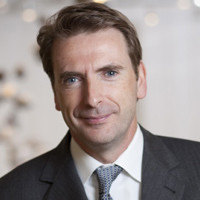 Dr. O’Loughlin graduated from University College Cork (NUI), Ireland in 1991, with an M.B.,B.Ch.,BAO (MD equivalent). He completed his Internship/Residency training in Internal Medicine at The Mercy Hospital in Cork, Ireland and subsequently at Wythenshawe Hospital and North Manchester General Hospital in Manchester, England. He served as a subspecialty registrar (fellowship) in Internal Medicine and Gastroenterology at Kings College Hospital and Greenwich/Newham Hospitals in London, England until 1997. He is a Member of the Royal College of Physicians of the United Kingdom and holds ECFMG certification since 1996.

He completed Internal Medicine residency at the University of Texas Medical School in Houston in 1999 and completed fellowship in Gastroenterology and Hepatology at the University of Miami/Jackson Memorial Hospital. He was Assistant Professor of Medicine, Director of Gastrointestinal Endoscopy and Director of the Celiac Disease Clinic at the Medical College of Wisconsin prior to moving to Raleigh where he joined Digestive Healthcare in June 2007.

He has presented seminal research in gastrointestinal diseases at the annual American College of Gastroenterology and American Gastroenterology Association meetings. He has authored clinical research and clinical practice manuscripts in the gastrointestinal literature and contributed to major text books in the subspecialty. Areas of interest include Celiac Disease, Gastrointestinal Bleeding, Capsule Endoscopy, Colorectal Cancer Screening and Prevention, Pancreatic-biliary diseases and Endoscopic ultrasound. He currently serves on the Rex Hospital Endoscopy Committee and Rex Hospital Therapeutics and Pharmacy Committee.

He currently lives in Cary with his wife Erin and three children ages 3, 5 and 7 years old. The family loves to go to the all of the wonderful parks in Wake County and spending time outdoors walking, gardening, hiking and swimming. An avid soccer fan, he still manages to play at least one game a week.